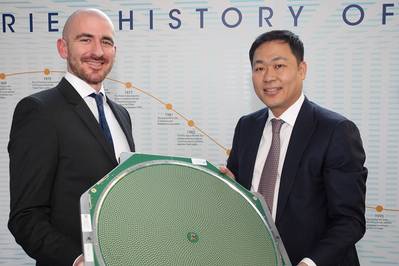 “Intellian is very pleased to be partnering with Kymeta to bring to market the next generation of VSAT technology,” said Eric Sung, President and CEO of Intellian Technologies.  “Over the past few months of discussions we have found Kymeta’s corporate culture and philosophy to be closely aligned with our own, sharing a keen focus on enabling overall market growth by making VSAT technology simple and easy to adopt across all segments.”

Dr. Nathan Kundtz, founder, President, and CTO of Kymeta Corporation commented, “Intellian is a highly reputable and innovative developer of terminals for the maritime market. Working together we will create affordable products for large markets, which are currently un-addressable or are underpenetrated.”

Kymeta Corporation, which has been listed for the past two years by CNBC’s The World’s 50-Most Disruptive Companies list,  is commercializing its mTenna product—a new, innovative software-enabled metamaterials-based electronic beamforming antenna for satellite communications.

The company is based in Redmond, Washington and operates on a worldwide basis and was selected by Future in Review as a 2014 FiRe-Starter company.