Money is flowing, and it sure seems like it’s a good time to be a startup entrepreneur. Just how good?

Well, PitchBook just released new data this week showing that $8.1 billion in venture capital was invested in the U.S. during the second quarter — the most in the past four quarters. (Deals, however, were down).

Another bright spot: Early-stage rounds are on the rise, representing one out of every two deals. So, go raise some money!

In the Seattle area, things are nothing if not volatile on the venture fundraising path, as we’ve noted in the past. (Personally, I’d still like to see more activity going on, though some have argued that good business are getting funded here).

This chart shows what’s going on in Seattle: 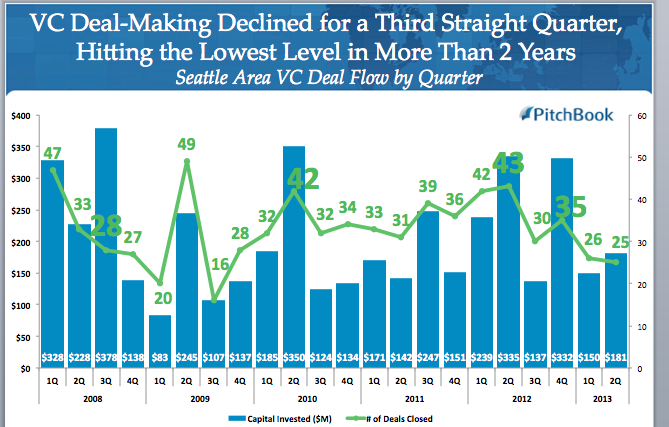 But some big deals are still getting completed, like this week’s $50 million whopper in satellite communications company Kymeta.

That got me wondering: What are the five biggest deals of the past two years in Washington state?

The folks over at PitchBook ran the numbers, and here’s what they found. What’s interesting to me about the list, especially if Kymeta were included, is that you’ve got communications; e-commerce; consumer Internet; biotechnology and enterprise software represented. An interesting mix for sure.