Kymeta believes that this is the first time a metamaterials-based antenna has established a connection with a Ka-band satellite. The connection used an aperture size of 15 by 17 inches and was about one centimeter thick. The antenna was powered by a USB cable using less than three watts of power to drive the electronic beamforming antenna.

“This milestone is significant because it proves that our technology works in the real world environment outside of a laboratory, and that it holds promise of becoming a viable solution for satellite communications,” said Bob McCambridge, Kymeta’s chief operating officer.

“Euroconsult has been following Kymeta’s developments and our research indicates that its new antenna could offer market-changing opportunities for multiple verticals in the satellite sector, particularly for mobile applications,” said Susan Irwin, president of Euroconsult’s U.S. office. “The fact that they have now successfully demonstrated Ka-band high definition video reception from a DTH satellite is a strong indication of their potential in this fast-moving and innovative industry.” 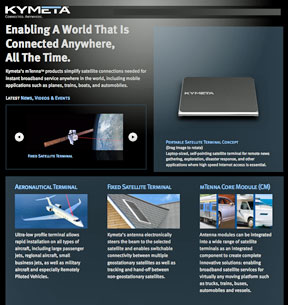 The technology behind Kymeta’s metamaterials antenna was developed by Dr. Nathan Kundtz, co-founder and chief technology officer of Kymeta and an expert in the field of metamaterials, who worked on the use of advanced structured materials in beamforming applications. His research resulted in the PCB-like surface that allows for an antenna that is flat, light and can be mass-produced using existing manufacturing techniques available to the industry for low-cost production.

“Closing a link with a satellite is a difficult challenge with any new technology. You need a high performing antenna to get the job done. The efficiency has to be high. The polarization fidelity has to be good. At the end of the day it just has to work; there’s nowhere to hide,” said Kundtz. “I am proud of our team of designers and engineers, and am excited to see our company moving forward at full throttle.”